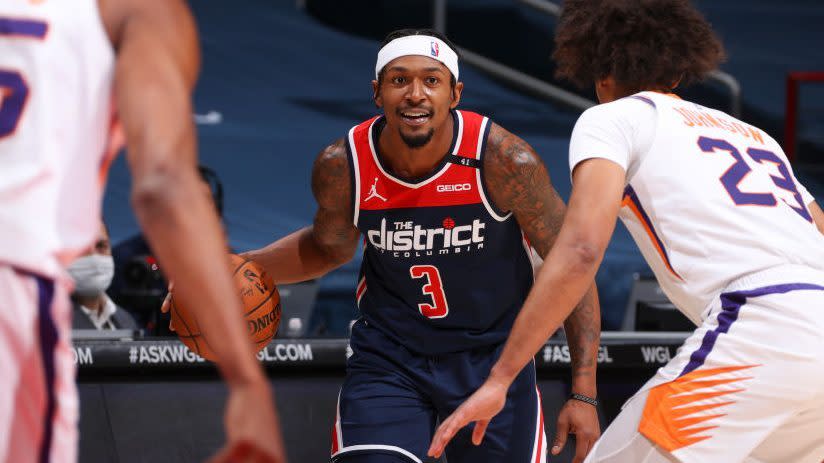 The NBA season is in full swing, and we will be here each weekday with the NBC Sports daily roundup Three Things to Know — everything you might have missed in the Association, every key moment from the night before in one place.

The sharks are circling.

Despite the Wizards’ win on Monday night (upsetting the Suns), there is blood in the water around Washington’s slow start. The Wizards are 3-8, the Russell Westbrook experience is not what Washington dreamed it would be (and he is now out for a week with a quad injury), starting center Thomas Bryant is lost for the season with an ACL tear, coach Scott Brooks’ seat is getting plenty hot, and when Bradley Beal was asked recently about the slow start he said:

It is Beal that has the sharks — other teams’ GMs — circling.

When I recently asked a front-office source about James Harden’s trade possibilities, he re-directed the conversation to Beal. That’s who other teams are watching and waiting for, he said — that’s the guy other teams would give up the home-run package to land. I’m not the only one hearing that, Kevin O’Conner at the Ringer and former Memphis front office member John Hollinger at The Athletic wrote about Beal in recent days. Beal is generating a lot of buzz.

Beal is an All-NBA level player who leads the league in scoring at 34.9 points a game, plays good defense, is a floor-spacing wing who doesn’t demand the ball be in his hands every trip down the court, and whose game could fit into any system. At age 27, Beal is at the start of his prime.

And, Beal is on a bad team with limited prospects for getting better. Trading Beal could jump-start a rebuild if the right package of picks and young players comes back to our nation’s capital in the deal.

Except, Beal has not asked for a trade — rather the opposite, he extended with the Wizards last season — and every call to Washington that brings up Beal ends quickly. The Wizards are not yet seriously talking Beal trade. Washington entered this season with dreams of the playoffs and 11 games, no matter how bad things look, is too quick to abandon those dreams.

Those circling sharks don’t think that will last much longer.

In a league that expects frustrated superstars to try and push their way out the door, Beal is the next logical candidate. He is reportedly frustrated with the losing in Washington — he doesn’t necessarily want to jump ship to form a superteam; he just wants to be in a place where he can legitimately compete in the postseason. Right now, that doesn’t look like Washington.

Teams will be patient. Considering there isn’t much left in the once-heralded top-heavy 2021 free-agent class (Giannis Antetokounmpo, Paul George, LeBron James, Rudy Gobert, Donovan Mitchell, Jayson Tatum, and Bam Adebayo all signed extensions with their teams, and Kawhi Leonard is expected to re-sign with the Clippers), if a team is going to land a franchise-changing player, it will have to be via trade. And that means Harden, and maybe Beal at some point.

Beal is a better fit for a lot of teams than Harden — four years younger, plays better defense, doesn’t need the ball in his hands for isolation/pick-and-roll every time down, hasn’t been as demanding on a franchise — which is why the sharks are circling and willing to wait.

Right now, Beal is not available via trade. It’s not clear if and when he will be. But know other teams are watching and waiting, keeping an eye on Washington and being ready to strike the second things change.

CJ McCollum has been the best Trail Blazer this season.

This is a team with perennial All-NBA player Damian Lillard. But McCollum returned this season with more focus on taking and hitting threes — 11 attempts from deep a game and hitting 44.5% so far — and that has him scoring more points and doing so more efficiently than his backcourt partner.

With the game on the line Monday night — Portland down one and with time for one final possession — the ball was in the hands of McCollum, not Mr. Clutch Lillard.

“I work on this stuff. I work on my game. I tell people all the time: `I’ve been ready,’” McCollum said after the game, via NBC Sports Northwest.

Carmelo Anthony was critical for Portland as well with 13 fourth-quarter points, draining corner threes right in front of the Raptors bench.

Anthony had 13 points in the fourth quarter, including several big shots from right in front of Toronto’s bench – where the Raptors made noise all night.

Pascal Siakam had a shot at his own game-winner as time expired, but it rimmed out. That’s two games in a row Siakam has missed a chance at a game-winner, and it just sums up the 2-8 season the Raptors have had so far.

3) The coronavirus still smacking the NBA around

Just a few days ago, the NBA touted how it had just one game postponed this season due to the coronavirus.

Now, make that four. Games postponed now include Miami/Boston on Sunday, Pelicans/Mavericks on Monday, and Boston/Chicago on Tuesday also will be called off due to COVID-19 protocols.

NBA GMs had a conference call with the league on Monday; owners will do so on Tuesday, with discussions of how to get a handle on the virus that is surging across the United States and through the NBA. Expect tighter health and safety guidelines to be announced, and maybe changes in practice schedules/procedures, among other things.

Do not expect the league to pause for a week or two. While some around the league have suggested it, as we have written about in this space before, it is not an idea with much traction around the NBA. Does anyone really think sending players home for a week or two will see them return with lower rates of COVID-19 infections? Does anyone think players will just stay home and make sure they are not exposed for two weeks?

It’s not going to be pretty, but the league is going to just play through this.

Watch Aaron Gordon throw it down on Giannis Antetokounmpo.

Antetokounmpo got the last laugh as the Bucks won the game, but damn that is impressive.

Check out the latest on Antetokounmpo and the Bucks

Watch Aaron Gordon throw it down over Giannis Antetokounmpo Bucks and Pistons take knee on court after tip-off (video) NBA coaches respond to riot at U.S. Capitol as games continue as scheduled