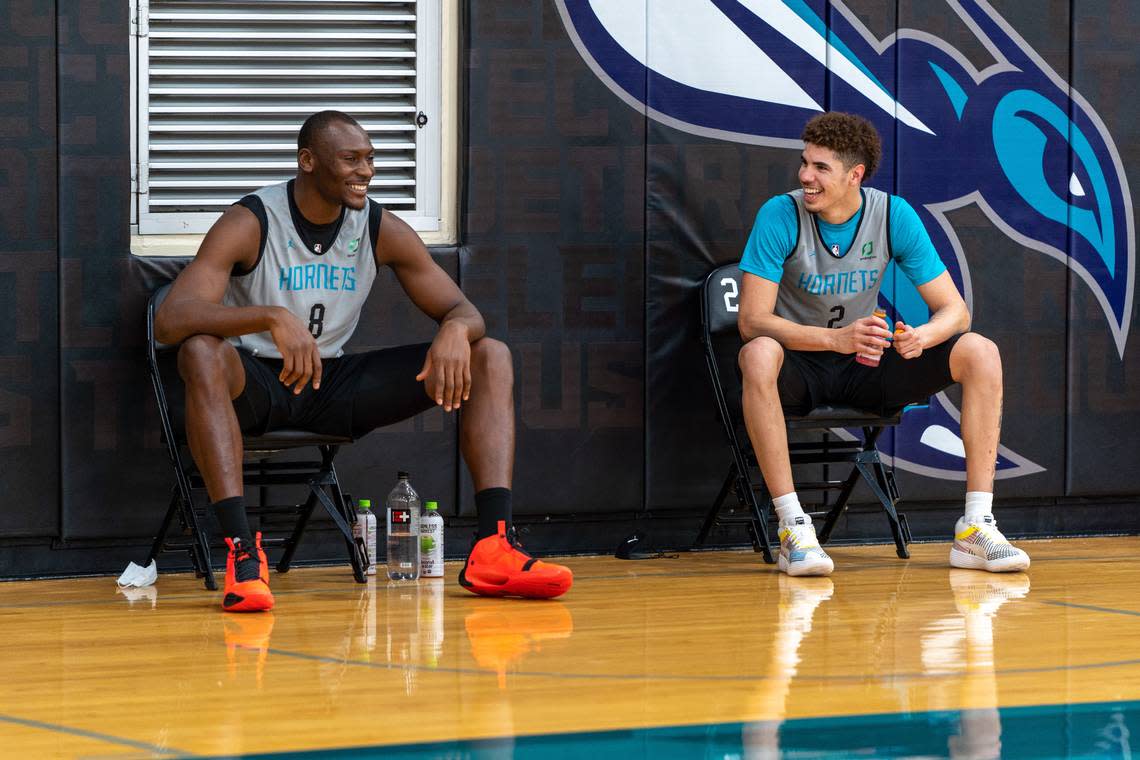 Charlotte Hornets center Bismack Biyombo got a chuckle over all the Twitter chatter Friday night, after he was seen on video fussing at rookie LaMelo Ball.

Those two have become close, with Biyombo serving as a mentor to the Hornets’ No. 3 overall pick.

“I heard about that video. We actually laughed about it,” Biyombo said of speculation he was angry at Ball at the end of the victory over the Pelicans. “He’s my little brother. We have fun.”

Biyombo, a 10-year NBA veteran, took Ball under his wing in the preseason. The two became so close so fast that coach James Borrego noticed them constantly huddling during team film sessions.

What was apparently them goofing around became something else on social media.

“We were talking like, ‘We’ve got to stop playing (around); we’re playing too much. Taking it a little too far,” Biyombo said of how him pushing at Ball in post-game congratulations was viewed as hostile.

The Hornets re-signed Biyombo to a one-year, $3.5 million contract to add depth at center and mentor young players. His on-court role expanded dramatically when Cody Zeller broke his left hand in the season-opener.

Zeller is out at least until early February. Now, Biyombo is starting and averaging 26.8 minutes, second-most of his career behind his second season (his first stint in Charlotte).

How is Biyombo handling all this playing time, in a span when the Hornets play 10 games in 16 nights?

“To me, it’s whatever we have to do — collectively,” Biyombo said of shifted roles without Zeller. “You see (shorthanded rosters) all around the league, with COVID going on.

“There’s a lot going on. For me, the focus is, ‘What can we do today to win this ball game?’ Then worry about the next one.”

After completing last season inside a bubble on Disney’s campus outside Orlando, the NBA is trying to hold a season with home and road games. The NBA postponed two games Monday — Pelicans-Mavericks and Celtics-Bulls — over COVID-19 protocols. The Philadelphia 76ers were down to seven available players Saturday in a loss to the Denver Nuggets.

Biyombo, on the players association’s executive board, said Monday morning he anticipates the NBA changing rules to “tighten some things up” regarding COVID-19 spread.

“I hope we’re going to be able to finish the season,” Biyombo said. “It’s unfortunate you have to keep postponing games here and there. But, for the sake of the game and the fans, it’s the right thing to do.”

The Hornets just returned from a four-game road trip where players were all sequestered in their hotel rooms between practices and games. Biyombo said that’s just how it must be in the pandemic.

“You kind of have to self-quarantine,” Biyombo said. “We all ought to sacrifice something to get through the season. And I think everybody is doing the right thing.”