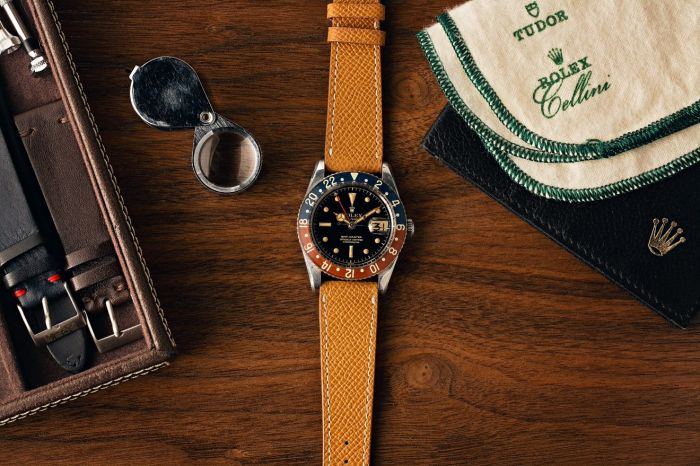 For more than sixty years, the GMT-Master has been a favorite for both first-time buyers and seasoned collectors. Today, it is regarded as one of the most desirable luxury watches in the entire world, and is currently available in stainless steel, white gold, and Everose gold options, along with a two-tone steel and Everose version, with retail prices starting at $9,700 as of 2020. 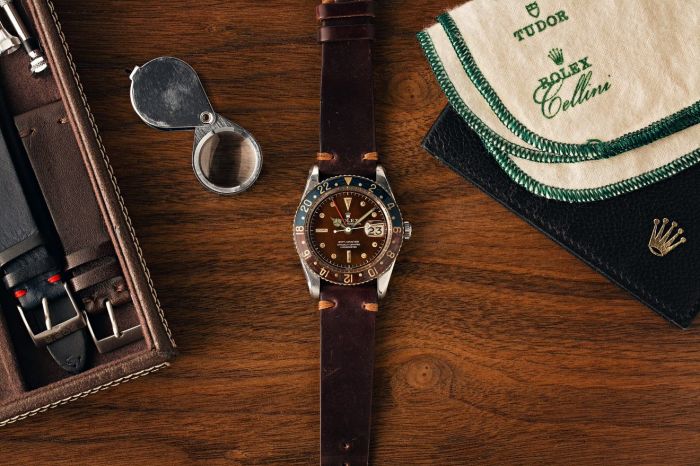 This watch came to us from the son of a highly decorated Captain in the Merchant Marines. Born in 1909, the original owner of this Rolex GMT-Master had a long and illustrious career in the armed forces, starting out in the 1930s and continued all the way up until his retirement in the early 1970s. He began his military career with the US Navy, and at some point picked up this GMT-Master, before going on to become a Captain with the Merchant Marines. During his time with the armed forces, he played an integral part in many wars and international conflicts, including WWII, Vietnam, and Korea.

His involvement in countless important missions earned him many distinctions, and after purchasing his Rolex GMT-Master, it rarely left his wrist until his passing in 1987. Although this watch was purchased as a reliable timekeeping tool and saw daily rigorous wear – often in dangerous or extreme conditions – it meant a significant amount to its owner and was one of his prized possessions. His son recalls some of his favorite memories with his father were when they would take the family boat out on the water to go sailing with his brothers, and during those times, just like during times of war, this Rolex GMT-Master was always on his wrist. 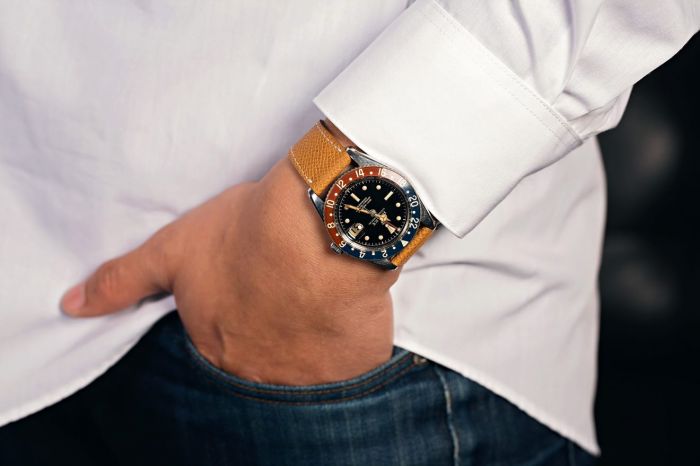 This GMT-Master belonged to an individual that has traveled to the furthest corners of the world. Originally purchased from the Rolex store in Lucerne, Switzerland, this watch would go on to accompany its owner absolutely everywhere, from 1300 meters underground in the copper mines in Kitwe, Zambia to Al-Kufrah, Libya where it spent an extended period of time bouncing through the desert in a Land Rover – and picking up a few scratches and stories in the process.

The original owner recalls wearing this GMT-Master through all of his adventures and travels, from climbing up the Great Pyramid in Egypt to traversing back and forth between Amman and Baghdad in 1980s Chevy Impala taxi cabs. This watch was present for every possible adventure and milestone in its owners life, and was a faithful timekeeping friend through three marriages, time spent navigating the Nile, Zambezi, Rhine, and Mississippi rivers, and even being evacuated to Athens from Beirut just before the Lebanese Civil War. Does it still run and keep proper time? You bet it does. 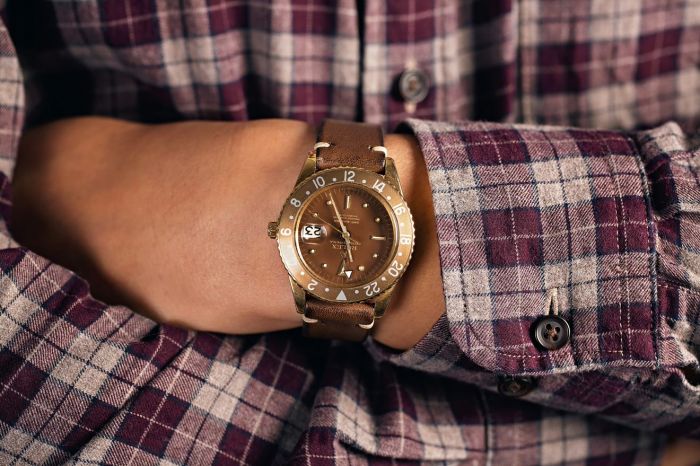 This Rolex GMT-Master came to us from the grandson of a doctor in North Carolina. Born into a humble household, he worked hard as a college professor until he met his wife, whose father – a man also from humble beginnings, whose first job was pulling a vegetable cart – offered to fund his dreams of continuing medical school. He graduated from Wake Forest School of medical school, and would go on to specialize in plastic surgery and post-trauma reconstruction, becoming a specialist in the hands and faces of people who had been through major accidents.

His grandson recalls that his true passion was working with his best friend, a trauma surgeon, to rebuild the more complex parts of seriously injured people before too much scar tissue had developed. He also served on several research medicine teams that helped pioneer new methods of organ transplants in the 1970s that significantly increased their success rate. Eventually, he opened his own practice, where his wife got her start as a marketing professional before going on to become a professor of journalism at UNC. Despite his success, he always remained true to his humble roots and rarely ever purchased himself nice things. The one exception was this Rolex GMT-Master, which he purchased while on a family trip in Switzerland, and that he wore during the years while running his own practice.

This early GMT-Master is a wonderful and extremely rare example of Rolex’s iconic model. Manufactured by Rolex in 1960, this tool watch features its original black glossy dial with gilt print reading “Officially Certified Chronometer”, which is highly sought after by collectors due to its rarity. The “OCC” dial was later replaced with the “Superlative Chronometer Officially Certified” signature. The hour markers have aged to a creamy soft yellow and perfectly match the hands, completed with its original, luminous 24-hour hand with a small arrow tip. The red and blue Pepsi bezel insert has naturally aged to a light and appealing shade of red and blue giving a “ghost-like” appeal. Furthermore, this GMT Master features early, pointed crown guards, which Rolex added for protection. These pointed guards, shaped like “little horns”, are referred to by collectors as “cornino”. The reference 1675 has become a true collectible in the world of vintage watch collecting, and the present watch from the earliest days of production provides extraordinary, long-term value to avid collectors. 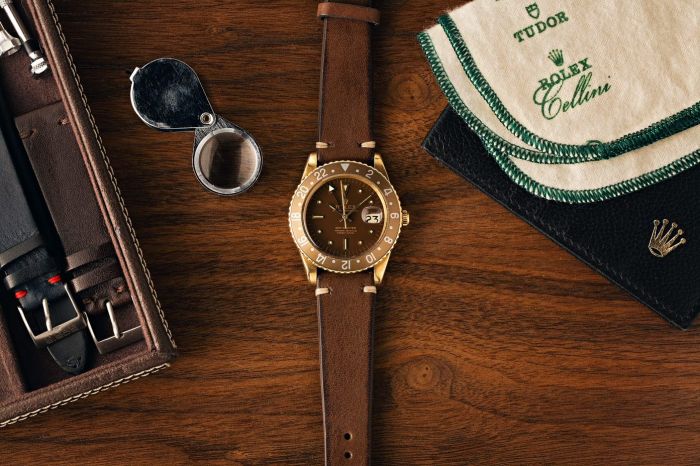 This Rolex GMT-Master came to us from a clockmaker in Scotland, whose father acquired it as part of a box filled with various items that he had purchased from a local auction hall in their small town. When his father passed, the man inherited a box filled with old watches and clocks, many of which were purchased from that exact same local auction saleroom. At that time in 1974, he was working as a clockmaker and was in the process of starting his own business, so the box of watches and clocks from his father was put away and forgotten about for many years.

In 2001, the clockmaker and his wife emigrated to Naples, Florida and this Rolex GMT-Master just happened to be among the boxes of personal and family belongings that had been shipped out. When he first discovered it among the various watches and clocks left to him by his father, he didn’t know much about it, but showed it to Rolex-certified watchmaker who told him that it was a valuable and noteworthy watch. After learning of its value and doing some more research about exactly what his father had left him, he came across our website and ultimately decided to sell the watch to us. Two years ago, the clockmaker and his wife sold their business in Florida and moved to Spain, so that they could be closer to their family in Scotland, while still enjoying the great sunny weather.